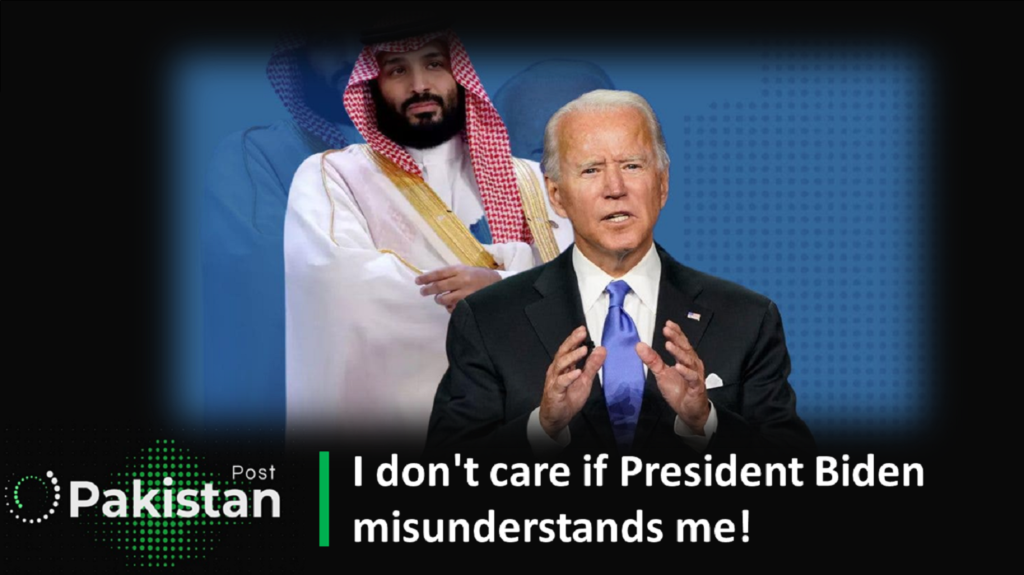 Saudi Crown Prince Mohammed bin Salman has said that if the US president has a misunderstanding about him, he does not care.

In an interview with an American magazine, the Crown Prince also said that he did not see Israel as an enemy but as an ally.

The Saudi Crown Prince’s interview with The Atlantic was also published by the Saudi Press Agency.

In this interview, Crown Prince Muhammad bin Salman spoke in detail on many issues, including Islam, Wahhabism, the Qur’an, Israel and the United States.

The Atlantic asked the Crown Prince if he would modernize Saudi Arabia so that its Islamic identity would be weakened.

In response to this question, the Crown Prince said, “Every country in the world has come into being on the basis of different ideologies and values.” The United States, for example, is committed to values ​​such as democracy, freedom, and a free economy. People are united on the basis of these values. But are all democracies good? Are all democracies working properly? Certainly not.

“Our country is built on the values ​​and ideologies of Islam. It has tribal culture, it has Arab culture. Saudi culture and beliefs are also important. This is our soul. If we let it go, the country will be destroyed.

The Saudi Crown Prince said that the question for us is how to put Saudi Arabia on the right path of development and modernity. Similar questions for the United States are how to keep democracy, free markets, and freedom on the right track. This question is important because they can go the wrong way.

He added: “So we will not run away from our values ​​because this is our soul. There are holy mosques in Saudi Arabia, no one can remove them. It is our responsibility to maintain these holy mosques forever and we want to keep the country on the right track for the Saudi people, for the region. On the basis of peace and coexistence, we want to include things from the rest of the world.

Moderates do not agree with the term Islam

The Atlantic journalist asked Crown Prince Mohammed bin Salman: “I think you would agree that if we were talking to someone in your position in 1983, the way moderate Islam is compared to Is being promoted, it is completely different.

In response to this question, the Crown Prince said, “I do not use terms like liberal or moderate Islam because the use of this term makes extremists and terrorists happy.” The use of a term like moderate Islam is good news for them. If we say moderate Islam, it seems that Islam is being changed in Saudi Arabia and other Muslim countries which is not correct.

“We are returning to the true teachings of Islam. This is the path of the Messenger of Allah and this is the path taken by the four caliphs. This is the way to a free and peaceful society. Christians and Jews also lived under his rule. They have taught us to respect all cultures and religions. This is the teaching of the Prophet and the four caliphs. That’s the decent thing to do, and it should end there. What has happened is that extremists have hijacked and changed our religion to further their own interests.

The Crown Prince said: “They are trying to get people to view Islam in their own way. The problem is that no one is arguing with them or taking them seriously. In this case, they have the opportunity to spread their extremist views. This has led to the emergence of highly extremist terrorist organizations in both Sunni and Shia groups.

The Crown Prince said of Wahhabism that he would like to say that Muhammad ibn ‘Abd al-Wahhab was not a prophet. He was a scholar and the same scholar who used to be in Saudi Arabia. The problem is that in the Arabian Peninsula, only Abdul Wahab’s students knew how to read or write history. And they wrote it in their own way.

Abdul Wahab’s writings are used by extremists for their own agenda. But I am sure that if Abdul Wahab, Bin Baz and others were alive, they would have fought extremists and terrorists. Islamic State does not cite the example of a living religious figure in Saudi Arabia. People carry out their agenda in the name of those who are not in this world.

“Today we are on the right track. We are going back to our roots, we are going to pure Islam and it is for the benefit of all. If you were interviewing in 2016, you would say that these are all speculations and speculations. But we have done it. At this time you can see Saudi Arabia with your own eyes. Watch the Saudi video from the last six or seven years. We have done a lot and there is still a lot to do.